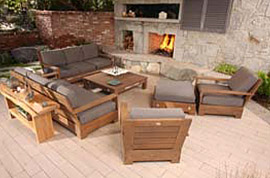 It is said that East is East and West is West, and never the twain shall meet, but two noted landscape designers, Nick Williams and his good friend of 40 years, Tom Torre, have managed to transform a slice of barren Malibu beach ground into a functional and artistic setting that could have easily been photographed in the Hamptons. 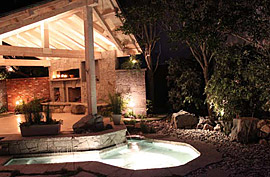 Williams and Torre started by marrying the exterior space around the patio to the nearby dune area of the beach, planting natural beach grasses and installing an inviting walkway that beckons one to head to the surf, while also bringing the surrounding area into relationship with the home. The wooden boardwalk was accessorized by a pair of wood chairs nestled in the sea grass by the beach, a classic Hampton's look. 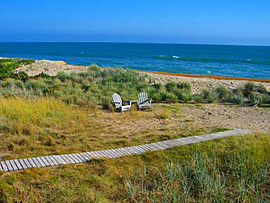 The high angled roof features an open beam ceiling in stained douglas fir with a ceiling fan, and the dominant feature of the room is a striking granite fireplace with an adjacent recessed bay for kindling and firewood. In the evening, lit by Williams' elegant exterior lighting, the effect creates a tranquil, homey setting that is both soothing and inviting. The space seems to have grown there naturally, in perfect harmony as a bridge between the home itself and the natural beach area where it is sited. This is Nick Williams and Tom Torre at their very best!

“BEFORE AND AFTER” SERIES: